We carry many different books for the philatelist -- or stamp collector; and other books and accessories for numismatics -- coin collectors. 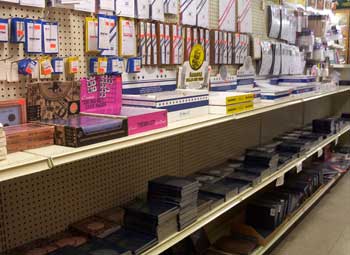 Stamp collecting is the most popular hobby in the world. However, if you are not a collector you may be asking, "Why stamps? Aren't stamps just pictures on little pieces of paper?. Scientifically speaking, yes that's correct. However, there is so much more to stamps that people of any age, any income and any interest can find some aspect of stamp collecting appealing and very satisfying.

Stamps represent historical events, people and places. Its an easy stepping stone to learning as much or as little about world or local history as you want. With the aide of a good stamp catalog the world is at your fingertips. Stamps makes learning fun and you might not even realize that you are learning. Its like visiting exotic places from your own living room.

Many ways to Collect

Some Specific Areas of Collecting

The advantage of stamp collecting is it allows you the ability to spend as little or as much money as you want. Many areas of collecting cost less than 15c a stamp, while others can cost in the $1000s. You can chose!

You can join a club and have weekly interactions with other people. This is a great way to meet people and make new friends and share ideas. Clubs are also a good way to increase your social skills and enjoyment by getting involved in community events (such as a local stamp show).

Do it Alone / Stress Reducer

You can also do stamp collecting alone. You can spend as much time or as little time as you want. You can work with your stamps any time, rain or shine! Its a weatherproof hobby. Its a passive hobby that can help reduce stress and easily gives a feeling of accomplishment.

There are no time constraints with this hobby. You can dedicate as much time as you want. You can take periods of time off from the hobby and when ready, jump right back in. This hobby offers great flexibility.

Always Something to Learn

You will never be done learning in this hobby. There are libraries of information on every subject of stamps and research is continuously uncovering more information. Also, new stamps are always being issued, creating even more items to be learned and researched.

If you want to be mentally challenged, then this hobby is for you. However, challenges are not a requirement to enjoy this hobby; some collectors collect stamps simply because the picture on the stamp appeals to them.

There are many excellent reasons why you might want to collect coins. For starters, coins tell unique stories. A coin's design, mint mark, condition and composition can offer a glimpse into history and a better understanding of the past.

Some people collect coins in the hope that they will appreciate in value. Some coins have intrinsic bullion value (such as silver, gold and platinum coins). Others become valuable because they are rare.

Coin collecting, one of the oldest hobbies, was once practiced only by kings and the wealthy. That's why coin collecting often is called the "king of hobbies" and the "hobby of kings."

In coin collecting, the condition of a coin (its grade) is paramount to its value; a high-quality example is often worth many times more than a poor example. Collectors have created systems to describe the overall condition of coins.

In the early days of coin collecting—before the development of a large international coin market—extremely precise grades were not needed. Coins were described using only three adjectives: "good," "fine" or "uncirculated". By the mid 20th century, with the growing market for rare coins, the American Numismatic Association helps identify most coins in North America. It uses a 1–70 numbering scale, where 70 represents a perfect specimen and 1 represents a barely identifiable coin. Descriptions and numeric grades for coins (from highest to lowest) are as follows: