In HO scale, we stock Lionel, MTH, Atlas, K-Line, and others. We also have American Flyer and some 2-rail O-Scale from Atlas and Red Caboose plus others.

We also have a large inventory of newLionel, out-of-production, and USED trains. 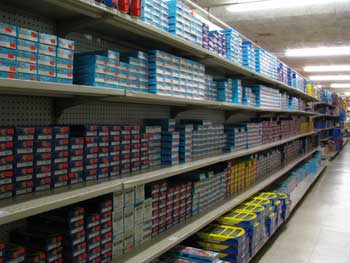 After the First World War there were several attempts to introduce a model railway about half the size of 0 scale that would be more suitable for smaller home layouts and cheaper to manufacture. H0 was created to meet these aims. For this new scale, a track width of 16.5 mm was designed to represent prototypical standard gauge track, and a model scale of 1:87 was chosen. By as early as 1922 the firm Bing in Nuremberg, Germany, had been marketing a "tabletop railway" for several years. This came on a raised, quasi-ballasted track with a gauge of 16.5 mm, which was described at that time either as 00 or H0. The trains initially had a clockwork drive, but from 1924 were driven electrically. Accessory manufacturers, such as Kibri, marketed buildings in the corresponding scale.

At the 1935 Leipzig Spring Fair, an electric tabletop railway, Trix Express, was displayed to a gauge described as Half Nought Gauge, which was then abbreviated as Gauge 00 ("nought-nought"). Märklin, another German firm, followed suit with its 00 gauge railway for the 1935 Leipzig Autumn Fair. The Märklin 00 gauge track that appeared more than ten years after Bing's tabletop railway had a very similar appearance to the previous Bing track. On the Märklin version, however, the rails were fixed to the tin 'ballast' as in the prototype, whilst the Bing tracks were simply stamped into the ballast, so that track and ballast were made of single sheet of metal.

HO scale trains elsewhere were developed in response to the economic pressures of the Great Depression. The trains first appeared in the United Kingdom, originally as an alternative to 00 gauge, but could not make commercial headway against the established 00 gauge. However, it became very popular in the United States, where it took off in the late 1950s after interest in model railroads as toys began to decline and more emphasis began to be placed on realism in response to hobbyist demand. While HO scale is by nature more delicate than 0 scale, its smaller size allows modelers to fit more details and more scale miles into a comparable area.

In the 1950s HO began to challenge the market dominance of 0 gauge and, in the 1960s, as it began to overtake 0 scale in popularity, even the stalwarts of other sizes, including Gilbert (makers of American Flyer) and Lionel Corporation began manufacturing HO trains.

Currently, HO is the most popular model railroad scale in both continental Europe and North America, whereas OO scale (4 mm:foot or 1:76.2 with 16.5 mm track) is still dominant in Britain.

There are some modellers in Great Britain who use HO scale. For them, the British 1:87 Scale Society was formed in 1994; it publishes a quarterly journal with news, views, and practical advice for modellers and collectors. A magazine, Continental Modeller, focuses on the railways of other countries, including America and Europe, and has extensive coverage of HO scale layouts.

Today, HO locomotives, rolling stock (cars or carriages), buildings, and scenery are available from a large number of manufacturers in a variety of price brackets.

Most modern HO trains run on two-rail track powered by direct current (varying the voltage applied to the rails to change the speed, and polarity to change direction), or by Digital Command Control (DCC) (sending digital commands to a decoder in each locomotive). Some trains, most notably by Märklin of Germany, run on alternating current, supplied by a "third rail" consisting of small studs on each tie (sleeper) down the centre of the track.

On simple, usually temporary layouts, power is supplied by a power pack consisting of a transformer and rectifier (DC), a rheostat for regulating power to the track (and thus train speed), and reversing to control model direction. On permanent layouts, multiple power supplies are traditionally used, with the trackage divided into electrically isolated sections called blocks; toggle or rotary switches (sometimes relays) are used to select which power supply controls the train in a particular block. With the advent of digital command control, block divisions are largely eliminated, as the computerized controllers can control any train anywhere on the track at any time.
(Defintion by Wikipedia)

Below are some typical scales with more specific terms that all run on 45 mm gauge track:

'A' scale. Uncommon term for 1:29 scale first used by Aristo-Craft for modeling standard gauge prototypes on 45mm track. Incorrect scale/gauge but proportionally a similar size to other popular brands of the time.